Bodycam footage of a police officer fatally shooting a 13-year-old boy last month appears to show the teenager holding his hands up before he is shot.

Adam Toledo can be seen running away from police down an alley in Chicago as the officer shouts for him to stop and show his hands.

The boy stops and appears to hold his hands up as the officer shouts “drop it”.

A shot is then heard as the officer repeats the command, and the boy crumples to the ground while the officer asks if he is alright and calls for an ambulance.

The footage shows it took 19 seconds from when the officer left his police car to when he shot the teen.

Further footage was released showing the officer telling the boy to “stay awake” as other officers arrive.

The first officer says he cannot feel a heartbeat and starts administering CPR as the other officers say “stay awake”.

Police said a handgun the boy had been carrying was found at the scene.

Chicago Police said the shooting happened after officers responded to gunshots detected by police technology before dawn on 29 March in the predominantly Latino and black Little Village neighbourhood on the city’s West Side.

The teenager, who was Latino, and a 21-year-old man ran off when confronted by police before Adam was shot.

The man was arrested on a misdemeanour charge of resisting arrest.

This is the second widely publicised US shooting of a black or Latino person during the trial of former Minneapolis police officer Derek Chauvin, who is accused of killing black man George Floyd last year by kneeling on his neck.

In the days before, footage of a white police officer shooting black man Daunte Wright during a traffic stop sparked protests in the same city the trial is taking place in.

Kim Potter, who claims to have accidentally used her gun instead of her Taser, was charged on Wednesday with second-degree manslaughter.

The video of Adam was posted by the Civilian Office of Police Accountability on Thursday after initially saying it could not release the video because it involved the shooting of a minor.

But Chicago’s mayor and police superintendent called for it to be released.

Before it was released, shops in downtown Chicago’s “Magnificent Mile” boarded up their windows in anticipation. 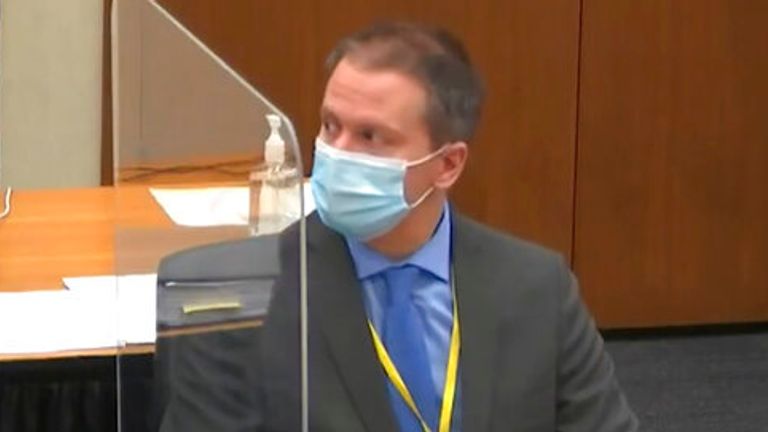 The release of previous police shooting videos have sparked major protests in the city, including the 2014 shooting of black teen Laquan McDonald 16 times by a white officer.

The city fought for months to keep the public from seeing the video after which the officer was eventually convicted of murder.

It also tried to stop a TV news station from broadcasting video of a botched 2019 police raid in which an innocent, naked, black woman was not allowed to put on clothes until she was handcuffed.

Third suicide among officers who defended US Capitol from rioters