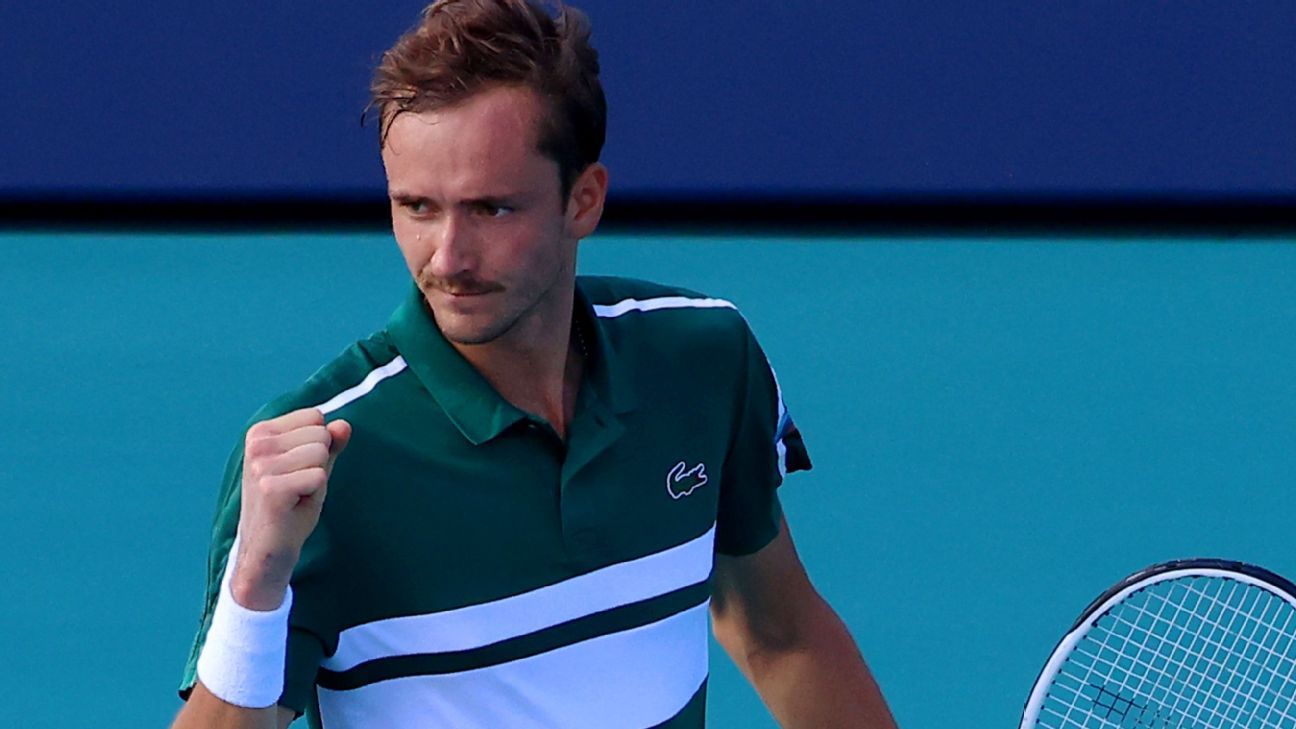 The last time a player outside of the Big Four (Federer, Nadal, Djokovic and Andy Murray) was ranked in the top two, a 9-year-old Medvedev had just started taking tennis lessons in his native Russia.

Now, at 25, Medvedev is in his second week as the world No. 2 and the top seed at the Miami Open. That’s part of why he is considered one of men’s tennis’ best hopes to fill the gigantic shoes of the sport’s longtime stars when they inevitably retire.

Nadal, Federer and Djokovic remain the favorites at majors and have relinquished just one such title since 2016 — at the 2020 US Open in which Nadal and Federer didn’t play and Djokovic was disqualified in the fourth round — but there have been some recent signs about the end of their collective dominance. All three opted to skip Miami for various reasons, and their absence at a Masters tournament provides an opportunity for Medvedev, coming off of his 10th career title in Marseille and his second major final appearance at the Australian Open, to win one of the biggest titles of his career. He faces No. 7 seed Roberto Bautista Agut in the quarterfinals on Wednesday.

Medvedev is aware of the constant speculation about if and when he will take home his first major hardware, especially as the spotlight gradually fades on the aforementioned trio. He understands it comes with the territory and will only grow louder, but he said it doesn’t add pressure.

“I don’t like too much talk about big goals in terms of ranking or results,” Medvedev said in a recent phone interview with ESPN. “I feel like, for sure, playing good in Grand Slams is one of my goals, and of course winning one, but I always try to not focus on [future] tournaments, just the one I’m in. So right now is Miami. I’m the [No.] 1 seed; I want to do good here.

“The most important match is always the next one.”

Even during Medvedev’s earliest days learning the sport, there were only two fantasies in his head.

“My dream was to play against Roger and Rafael Nadal,” Medvedev said. “That’s all I dreamt about. I thought it was impossible [to do], but I wanted the chance to beat them and take [their] title.”

Though it would take several more years for Medvedev to have a chance to face either player, he made his ATP Tour debut at the 2015 Kremlin Cup, playing doubles with his compatriot (and 2021 Dubai champion) Aslan Karatsev. Medvedev made his main draw singles debut the following year in Nice.

Medvedev advanced to his first final at the Chennai Open in January 2017 and jumped to a then-career-high No. 65 ranking — giving him main draw entries into the majors for the rest of the year. He reached the second round at Wimbledon, but he crashed in the opening round at the other three Slams — and in all of the Masters events in which he played.

If he ever wanted the opportunity to face Federer or Nadal with a title on the line, he knew he would have to fully dedicate himself to the sport.

“Before, I would win a match and then I would go back to my hotel room and play PlayStation until 2 a.m.,” Medvedev said. “And then my next match would be the following night, so I would wake up around 10 and I thought that was fine. But then sometimes, I would lose focus at 5-all in the third set, and that was probably because I didn’t get enough sleep.”

Ahead of the 2018 season, Medvedev and his coach, Gilles Cervara, added a sports psychologist to his team who helped Medvedev improve his focus, as well as a sports scientist to analyze data from his matches. Medvedev also made changes to his diet.

“He’s not saying, ‘I want to win this tournament and be at this level,'” Cervara said in a February podcast interview with French Tennis Magazine and translated by Tennis Majors. “He’s saying, ‘I want to be the best I can be,’ whether it’s in the next practice session or on the next point. He never said to himself and I never said to him, ‘You’ll be top 30.’ It was never a goal; it doesn’t work like that with him. He himself doubted, two or three years ago, that he could be in the top 30.”

The attention to detail refocused Medvedev.

“Now I know, if you want to be perfect, you go to bed at the same time every night, you eat only good food, you focus on the small things,” he said.

It didn’t take long for Medvedev to see results; he won his first career ATP title to open the 2018 season in Sydney. Before the year was over, he took home trophies in Winston-Salem and Tokyo.

A list of his 2019 final appearances looks more like a tour schedule of the year’s hard-court tournaments; he made nine title matches, all but one on the surface, and won four. Over the summer, he advanced to three finals in a row at all of the US Open lead-up tournaments. He nabbed his first Masters victory at Cincinnati and skyrocketed to No. 5.

Medvedev had a breakthrough at the US Open — including a surprising heel turn in which he was booed by the crowd and flashed a middle finger after a disagreement over a code violation in the third round — en route to an appearance in the final.

After advancing at the US Open, Medvedev openly basked in boos from the New York crowd. pic.twitter.com/hGBKfSXdlW

In the realization of his childhood dream, Medvedev faced Nadal in the final in a classic five-setter that lasted just under five hours. Though he ultimately lost, Medvedev won the respect of Nadal.

Medvedev didn’t immediately capitalize on his success at the start of the 2020 season, losing in the fourth round in Melbourne, and he returned to his home in Monaco with his wife, Daria, when the season shut down in March. Having spent much of his life on the road since he was a teenager, he took advantage of the chance to stay in one place and experience what he considered a normal life. Unlike many of his peers on the ATP Tour, he declined the chance to play in exhibition events and focused on practice.

When the season resumed, he was unable to replicate his results in New York but ended the year with victories at the Paris Masters and the ATP Finals. That carried over to 2021. Alongside Karatsev and Andrey Rublev, both of whom he grew up training with and still considers close friends, the Russian squad won the ATP Cup to open the season. At last month’s Australian Open, he rode a 20-match win streak all the way into the final against Djokovic.

“Daniil Medvedev, as I said previously, is the player to beat,” Djokovic said before the match. “He’s just so solid. Also, I heard Jim Courier calling him a master chess player because of the way he tactically positions himself on the court, and it’s true. You know, he’s definitely [a] very smart tennis player.”

After two days of unrelenting speculation about whether tennis’ future was now its present, Djokovic won, 7-5, 6-2, 6-2, to earn his 18th major title.

Despite the lopsided score, Medvedev’s stock has continued to rise. He didn’t need to win the Open 13 earlier this month to leapfrog Nadal in the rankings, but Medvedev did anyway.

“I knew I was going to become No. 2 no matter what the next week, but I wanted to do something good, to kind of prove, even to myself, I deserve it,” Medvedev said. “So it was great to win and then have this achievement.”

With his wiry, 6-foot-6 frame and blistering backhand, staggering versatility and on-court intellect, some of Medvedev’s peers might call his game “very weird” or “uncomfortable,” but few who watched his third-round match against Alexei Popyrin on Sunday would be able to question the legitimacy or validity of his new ranking. Fighting through debilitating leg cramps late in the third set and struggling to walk by match’s end, Medvedev gutted out the win and later called it “one of the sweetest victories” of his career.

“The guy is the best in the world right now, one of the best,” Popyrin said after the match.

There are more questions from reporters these days about his ability to win Slams, but Medvedev takes that as proof his hard work is paying off.

“It doesn’t really matter if you’re the No. 1 seed or not seeded; you still have to win the match, and that’s all that matters,” Medvedev said. “I’m still not perfect, but I’ve improved big time in all the small details in my life.

“I just wanted to know where my limit is [as a tennis player], and I feel like, so far, I haven’t reached one.”

Two-year extension of steel tariffs despite plea for imports from manufacturers
Who are the greatest MMA fighters by year, from 1993 to the present day?
Four Seasons Health Care plots sale after parent’s three-year insolvency
PM accused of ‘double standards’ over handling of Tory MP accused of ‘drunken groping’
Boris Johnson calls questions over his leadership ‘political commentary’