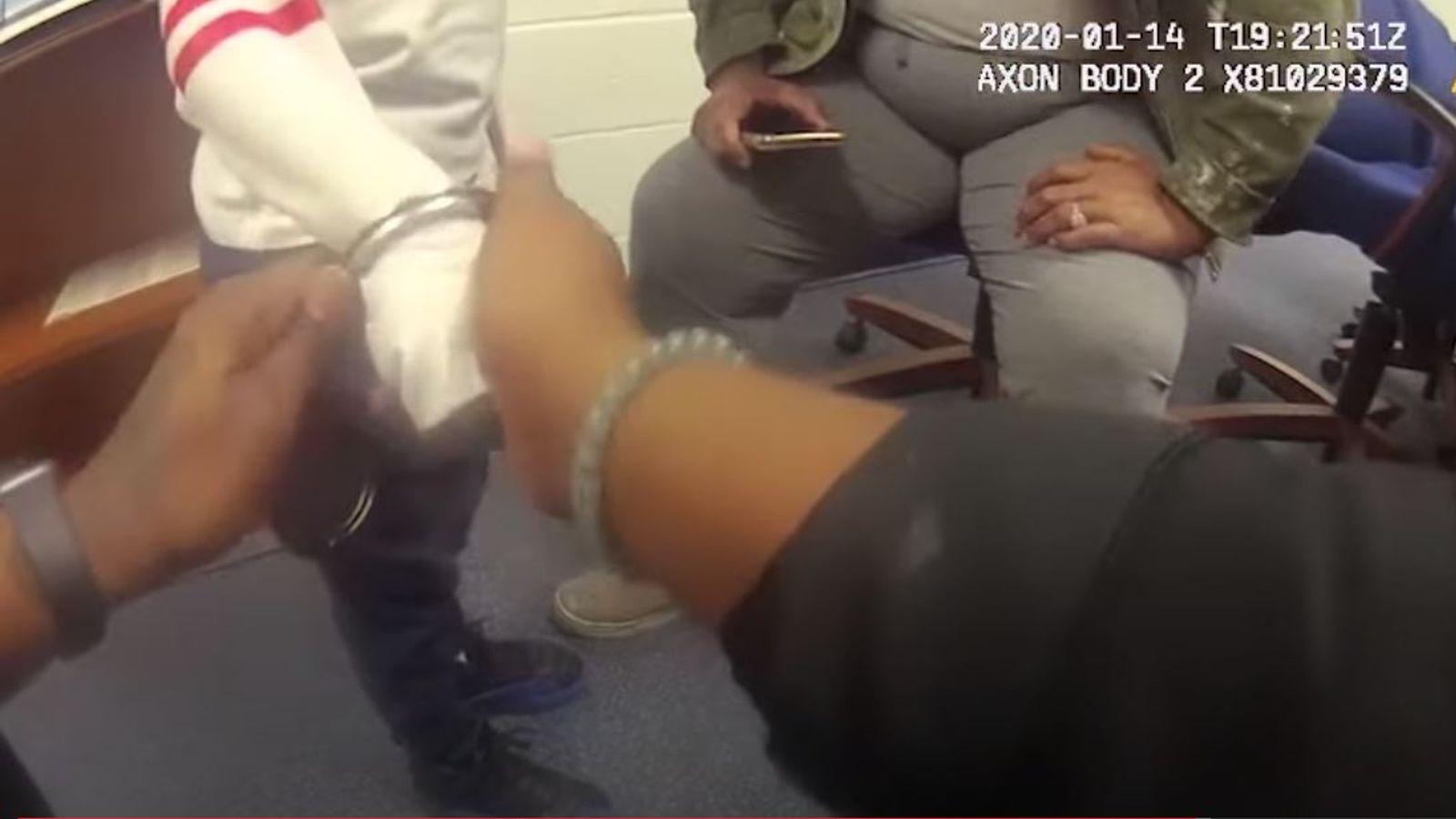 A police video in the US has sparked outrage after two officers were seen berating a five-year-old boy at his school, with one officer screaming in his face and another putting him in handcuffs.

The two officers, who work for the Montgomery County Police Department (MCPD) in Maryland, are facing calls to be fired over the incident, which happened after the boy had run away from his teachers and was found on a street after allegedly damaging a computer.

After returning the child to his school, a female officer can be heard telling him: “I hope your momma let me beat you” as he cries, before she screams inches away from his face.

She is then heard saying: “Oh my God, I’d beat him so bad,” before adding: “You do not embarrass me like this at school.”

In the footage, the officers can also be heard calling the boy “a little beast” and “a violent little thing”.

Later in a meeting with the boy’s mother, the male officer puts the youngster in handcuffs with his hands behind his back.

The officer tells the child: “When you get older, when you want to make your own decisions, you know what’s going to be your best friend?”, before pointing the handcuffs at him.

“Do you know what these are for? These are for people who don’t want to listen and don’t know how to act,” the officer adds.

The officers are also heard talking to the boy’s mother about disciplining her son at home.

The mother says: “I can’t discipline him, because the government won’t allow you.”

“Yes, you can,” the female officer replies.

“I’m not losing my child to the system and I’m not going to prison. I just want to show you all he is not being physically abused.”

“Who said he was?” the female officer asked.

“We believe it’s the exact opposite,” the male officer says.

“Yeah, we want you to beat him,” the female officer adds.

Bodycam footage of the incident in January was released for the first time on Friday as the boy’s mother is reportedly suing the MCPD.

In a statement, the police department said it received a call from a staff member at the school about a “five-year-old child who had left the school grounds and did not wish to return”.

The MCPD said two patrol officers – which it did not name – responded to the call and a complaint was subsequently made about their conduct.

It said an internal investigation had concluded into the incident and the findings would remain “confidential”.

Both officers remain employed by the police department, it added.

Nearly 500 people have signed a letter online calling for the officers to be suspended or fired, according to the Silver Spring Justice Coalition group.

The letter also demands the school system to review procedures for when police interact with children in schools.

Tiffany Kelly, a Montgomery County Public Schools parent and community activist, said: “This footage makes it clear that officers terrorised this five-year-old child in the place any child should feel safe and protected – at school.”

Will Jawando, a Montgomery County councillor, described the incident as a “systemic failure”.

He told NBC News: “I kind of knew what I was going to see, but it was worse than that. And so, I’ve just been saying I’m so sorry to that child and to the mother.

“I didn’t find out about this until the plaintiffs filed suit in January. No one told us – the police department, the school system – that’s another failure.

“You don’t deserve to hold the public trust if you have that poor judgement.”

Montgomery County Public Schools did not respond to request for comment, according to NBC News in Washington.

Awesomely Weird Alibaba Electric Vehicle of the Week: $4,500 Flatbed Electric Truck
Can new streamer Paramount+ compete with the likes of Netflix, Disney+ and co?
Future Power Rankings: College football’s best teams over the next three years
Adam Boulton on lessons to be learned from strikes past, present and what they mean for the future
Russian auctions Nobel Peace Prize medal – and raises £84m for Ukrainian refugees