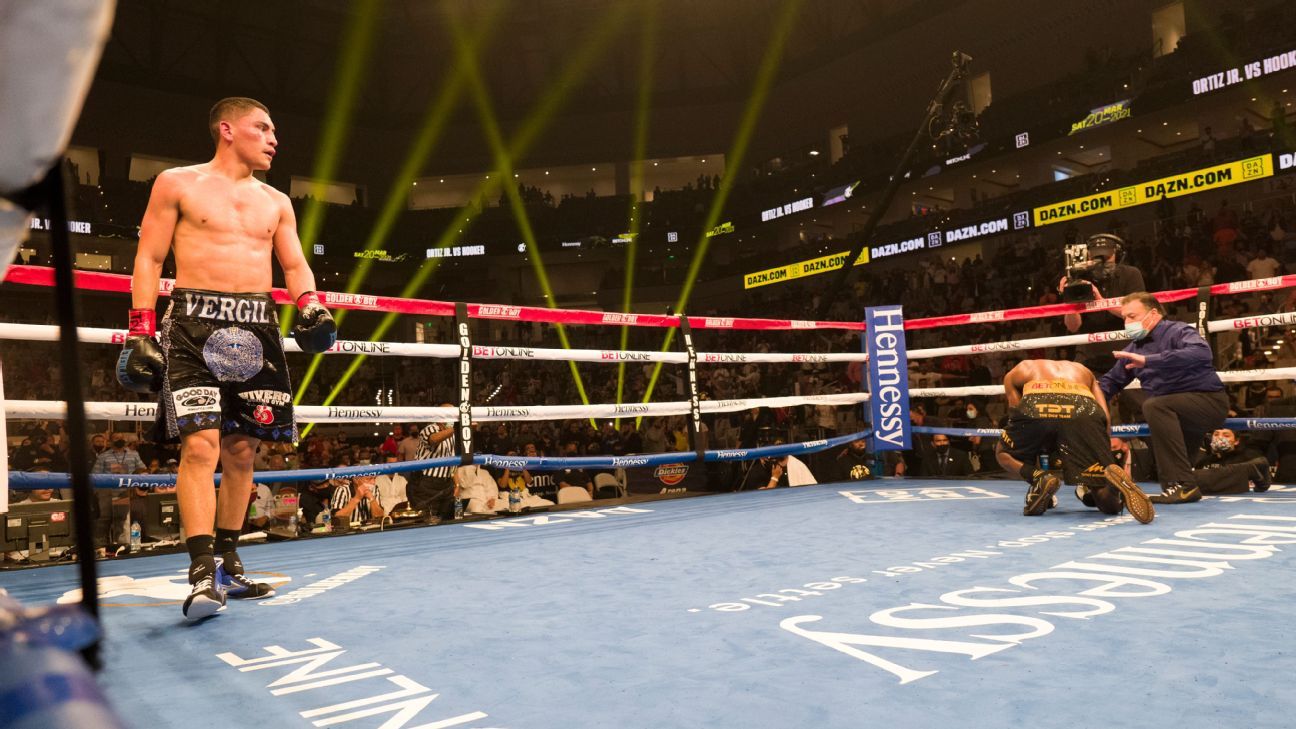 Saturday was a statement day in the world of boxing. Vergil Ortiz proved he could stand with an established veteran and former world titlist in Maurice Hooker, and continue to show off the skills and power that have made him one of boxing’s brightest young stars.

With a TKO in Round 7, Ortiz put himself into serious title contention and spoke the name Terence Crawford in his post-fight media interviews.

“This win gives me more confidence,” said Ortiz, after the fight. “I believe in myself even more now than ever that I am ready for a world title. I would love the opportunity to fight Terence Crawford. If I get any opportunity, I would take it. I don’t care if I’m ready or not; I want that fight.”

Whether or not Ortiz is ready for ESPN’s No. 1 pound-for-pound fighter is a matter of debate, but Ortiz’s results thus far in his career are eye-popping. With 17 knockouts in 17 fights, having never fought past the seventh round, his ambitions are clear.

But Ortiz wasn’t the only big winner on Saturday. Lawrence Okolie won a cruiserweight world title in his 16th pro fight, dispatching a former champion in Krzystof Glowacki in the process. And after more than 500 days out of the ring, Artur Beterbiev continued his winning ways in a successful defense of his WBC and IBF world titles — pushing his record to 16-0, with 16 KOs.

So what do these three wins mean? Ben Baby and Nick Parkinson break it all down.

Baby: Vergil Ortiz isn’t quite ready for Terence Crawford – but he could be close

“Vergil is young and up-and-coming,” said Maurice Hooker, shortly after his loss to Ortiz on Saturday. “But there are levels to this. He’s good. But he’s not ready for Terence Crawford. To be ready, he needs to just keep building himself up. He will be a world champ someday.”

I have to agree with Hooker here: Ortiz is good and he’s going to be a world champion one day, but he might not be ready for Crawford yet. Hooker touched Ortiz often enough to leave a mark, and was able to rough up the 22-year-old as he showed that even in a loss, he continues to be a very solid and entertaining welterweight. Give Ortiz credit for making the adjustment in the fight to go to the body, but beating someone of Crawford’s caliber requires a very special performance.

Even if that fight isn’t necessarily advisable in the short-term, a path exists for Ortiz to get Crawford in early 2022. If boxing’s politics can be ironed out, Ortiz is ready for some of the welterweights on the Premier Boxing Champions umbrella. Ortiz wants a title fight in 2021, and who’s to say he’s not ready for current WBA world titlist Yordenis Ugas, who has won three straight after a loss to Shawn Porter in March 2019. If Ortiz can win that fight, and maybe knock off someone like Danny Garcia or even a Josesito Lopez, he should be more than ready (and economically viable enough) for Crawford to seriously entertain the thought of a fight.

Also, let’s not forget that at some point, Crawford needs to start facing bigger names. The boxing world can talk about the elusive Errol Spence Jr. fight as loudly as they want, but in the here and now, Crawford desperately needs a fight against Shawn Porter if he hopes to maximize his career earnings. Ortiz is building up credibility in a hurry, and if there’s a boxer with a name that is actually willing to step in and fight Crawford, he’s not in a position to say no to a fight that makes sense. Crawford is also too good and too talented not to retire with some marquee wins over some big names that earn him some nice paydays.

If the opportunity is too big for both fighters to pass up, there’s no reason for it not to happen.

Parkinson: Beterbiev dominated and got some needed rounds. What should be next?

At 36 and with such a fan-friendly style, Beterbiev needs the big fights and spotlight without any more delays. After 519 days between fights, Beterbiev showed he has not lost any of his punishing finishing power in a 10th-round stoppage win over Adam Deines on Saturday. It keeps Beterbiev, who has the WBC and IBF world titles, as the No. 1 fighter in the light heavyweight division, and a unification fight seems likely for later this year.

Perhaps the one most fight fans want to see — and have wanted to see for a while now — is Beterbiev against fellow Russian Dmitry Bivol (17-0, 11 KOs), who defends his WBA version of the world title against British light-heavyweight Craig Richards on May 1.

Another Russian, Sergey Kovalev (34-4-1, 29 KOs), 37, once a feared world champion and No. 1 in the division, is not the force he was, has problems away from the sport and failed a drug test for synthetic testosterone in January. That fight seems unlikely for Beterbiev, but former champion Jean Pascal (35-6-1), 38, is another big possibility, since both are based in Canada. The chances of that last fight happening in the next 12 months is pretty strong, too — Pascal is ranked the No. 1 contender with the WBC.

After winning his first world title in his 16th fight, Okolie’s time in the cruiserweight division is likely limited. He will most likely be fighting as a heavyweight by the time he walks out for his 20th pro bout. How Okolie performs as a heavyweight is a different matter, but after Saturday’s impressive KO victory against former cruiserweight world titlist Krzystof Glowacki to collect the WBO belt, expect the Londoner to move fast towards unifying the world titles at cruiserweight.

Okolie has become a much more polished boxer in the last couple years, and he has always had one-punch knockout power, as evidenced by Saturday’s sixth round knockout of Glowacki with a right hand to the jaw. Harder tests lie in wait, against IBF world titlist Mairis Briedis (27-1, 19 KOs), from Latvia, and WBC titleholder Ilunga Makabu (28-2, 25 KOs), from the Democratic Republic of Congo.

Cruiserweight is not as competitive as the divisions above or below it, and Okolie has the potential to become world cruiserweight No. 1 in his next fight if he makes the Breidis fight a reality. With Oleksandr Usyk now at heavyweight, following his own successful unification of all four major world titles, Okolie can emerge as the division’s next unified world champion.